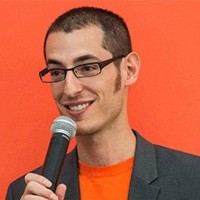 Sam Aquillano is the Founder and Executive Director of Design Museum Everywhere, an online, nomadic museum with the mission to bring the transformative power of design everywhere. Design is everywhere, so the museum has no permanent address — instead, Sam and his team turn the museum inside out, making it accessible to all across many platforms and locations. Sam is the host of Design is Everywhere, a weekly podcast on the impact of design in our lives.

In 2008 Sam received the Red Dot Design Award for his design work at Bose, and that same year the Bose Design Center received Red Dot’s prestigious Design Team of the Year Award. In both 2013 and 2018 Sam was named one of BostInno’s 50 on Fire, and in 2019 he was named one of Fatherly’s 100 Coolest Dads in America. Sam frequently speaks at events and conferences on design, innovation, entrepreneurship, and museums, including most recently at Harvard, MIT, TEDx, and various corporate gatherings.